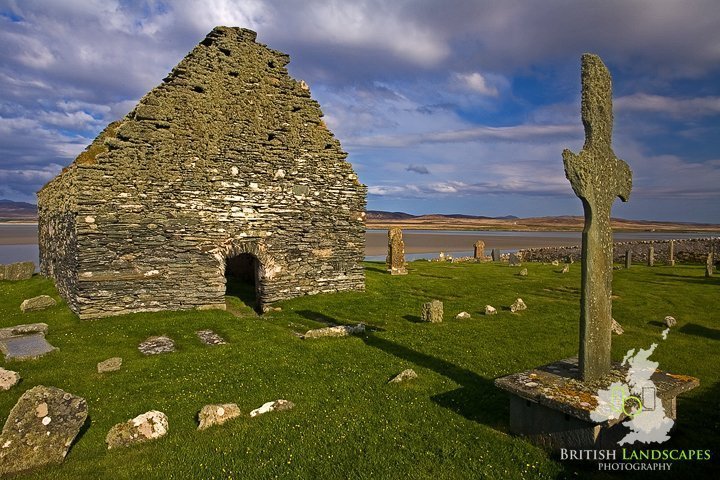 In this the latest instalment of a look at the British landscape I thought we would have something totally different. British Churches, Chapels and Crosses but set within the landscape.

Some of these are located in stunning locations and having thought of this theme it was only when I was going through my portfolio that I realised just how many images there are and certainly far too many to include in this one post. So I have selected just a few churches, chapels and crosses and who knows if you like what you see I may even share the others at some future date.

Why not let’s start with one of my most popular images of St Cwyfan’s Church in the Sea.

On all my travels around the British Isles, I don’t recall seeing other churches or chapels in such an unusual location. It is to be found on a small tidal island called Cribinau located off the west coast of Anglesey in North Wales and close to the village of Aberffraw. Also known as Llangwyfan the church can be reached on foot at low tide. Old maps show the church standing on the mainland of Anglesey but erosion by the sea of the boulder clay cliffs has since separated the church from the mainland.

For our next location, we visit Romney Marsh, Kent on the south-east corner of England.

Fairfield Church is dedicated to St Thomas a Becket.  It is said that an Archbishop of Canterbury was journeying across the dangerous Romney Marsh when he fell into one of the many ditches. He prayed to St.Thomas, as he came up for the second time, for a miracle to save him from a watery death. Just in time, a farmer arrived to save him, and in gratitude the Archbishop had the little church built and dedicated to St Thomas a Becket. The church is approached by a grass causeway built-in 1913. Beforehand the parishioners had to row across in a boat to reach the church for a service.

We don’t half move around on these short trips. We are now off to the west coast of Scotland on the Isle of Islay. The most southerly of the Inner Hebrides, lying off the west coast of Kintyre. Islay occupies a special place in the history of the Western Isles. It’s known in Gaelic as “Queen of the Hebrides”. The Antrim coast of Ireland is as close to Islay as is the mainland of Scotland.

The 12th century ruined chapel of Kilnave, Cill Naoimh in Gaelic meaning the church or burial ground of the saint, has a grim history. Within this charming little chapel, 30 MacLean clansmen were burnt to death in 1598 by Islay MacDonalds, the MacLeans having sought sanctuary in the chapel after a bloody battle with their adversaries on the shore of nearby Loch Gruinart. In the tiny cemetery, set in lawns of lush turf, carved grave slabs remain laid out around a 9 ft high Celtic cross, battered but still imposing, dating from around AD750.

Now an image captured on my photo trip to the North York Moors National Park over on the east coast of England. This is one of those images where “being in the right place at the right time” is so true.

Ainhowe or Ana Cross is situated on wild Spaunton Moor and has been a prominent landmark for hundreds of years. The original cross can be seen in the crypt of Lastingham Church, about 2 miles south of the present structure which stands at an impressive height of over 3 metres. This makes it the tallest cross on the moors but at one time it stood even higher, 8 metres high! The cross has been restored quite recently and the difference in the colour of the new shaft can clearly be seen.

Finally, on this trip, we remain in England but move down to the Somerset Levels in the south-west.

Burrow Mump is one of the most striking features in the otherwise flat landscape of the Somerset Levels. Despite its unusual appearance, the Mump is a natural hill, rising to a height of 24 metres above the levels below. The hill is made all the more striking because it is topped by the romantic ruins of a medieval church dedicated to St Michael.

The land was owned by Athelney Abbey as early as the year 937, and Burrow Mump has long been popularly associated with King Alfred, whose base was at nearby Athelney during his wars with the Danes. There was a church atop the Mump as early as the 12th century, but the current church is a product of the 15th century. Though the church itself is legitimate, its ruins were made to look more romantic in the 19th century, when the fashion for romantic follies was at its height.  It is well worth a climb to the top, for the views across the Somerset Levels can be quite stunning.

Well, that’s it for the latest stage of our journey and but don’t forget to let me know if you would like to see more Churches Chapels and Crosses.

In the meantime why not see if you can find any churches, chapels or crosses that I have not featured in the Galleries and Print Shop where you can purchase your own prints, canvases and other forms of wall art as well as stock image downloads for commercial and personal use.