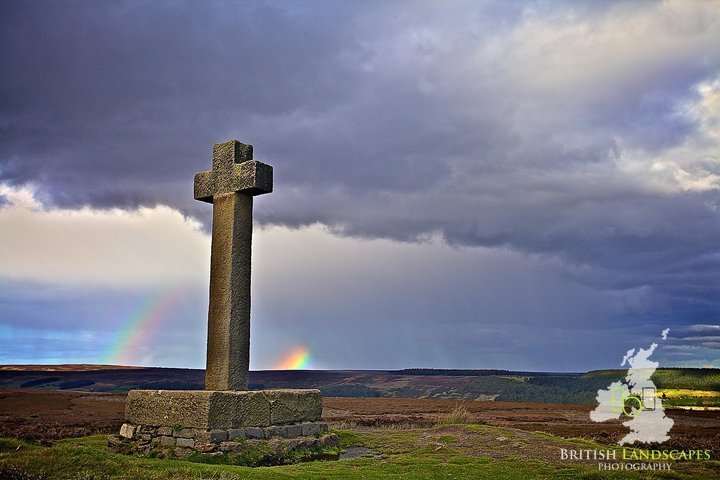 In September I was fortunate enough to make my first photo trip to the North York Moors National Park and if you haven’t already read about it you can by following my trip.

If I recall correctly the park is the sixth one to celebrate its Diamond Anniversary with it all starting last spring with the Peak District, closely followed by the Lake District, Snowdonia and Dartmoor.

Earlier this year it was the turn of the Pembrokeshire Coast and on 29th November it is the North York Moors.  Although I released many images shortly after my trip I have deliberately held some back so I could join in the celebrations of the anniversary itself.

The first image typifies the park and shows the Farndale Valley from Blakey Bank. Although this image appears to have been captured on a lovely calm day I can assure the wind was howling across the Bank and it took me all my time to keep the camera steady.

The second image shows one of the Millennium stones on the moor this one being close to Danbury High Moor having been sculpted by local man Mike Weatherill.

My third image shows another version of images captured at Ana Cross when I was fortunate enough to have one of those moments that all landscape photographers spend many hours searching and waiting for. This version shows a double rainbow carefully positioned either side of the cross.

The final image in celebration is from an area of Goathland Moor close to the North Yorkshire Moors Railway line and the famous village of Goathland itself.

The timing of my visit was planned to coincide with what I thought would be the best of the heather colour and that certainly proved to be the case at this location and probably the best and most abundant of the many areas I visited.

I hope you have enjoyed these few extra images and will join me in wishing “Happy Anniversary” and many thanks to everyone involved with the North York Moors National Park. More images can be found in the Yorkshire Dales, Moors and Northumberland gallery where you can purchase your own prints, canvases and other forms of wall art as well as stock image downloads for commercial and personal use.

Unfortunately, we have to wait a couple of years before the next Diamond Anniversary when in 2014 it will be the turn of Exmoor and the Yorkshire Dales, the latter of which may be even larger by then as there are plans to extend into Cumbria!!

In 2016 it will be Northumberland’s turn and the Brecon Beacons in 2017. After those, there will be a considerable wait as the next national parks were not confirmed for another 30 years plus and it is highly unlikely that I will be photographing them then so I better get on with it now.